A Common Error In Powers Of Attorney

Even if you do things the right way in estate planning, things may still turn out wrong if small details are overlooked. For instance, while you may recognize that it’s important to establish a power of attorney for an elderly relative, if the document fails to address certain contingencies, you may be powerless to act when your help is needed most. 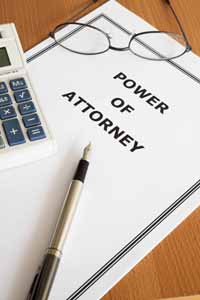 Powers under a power of attorney may be broad or limited. For example, a broad power of attorney often grants control over all of the principal’s assets. On the other hand, a limited power might restrict an agent’s activities to selling a home or other real estate.


While all of this may seem straightforward enough, if the power of attorney isn’t carefully drafted to accommodate changing conditions, a family’s intentions could be defeated. A common error is a document that fails to name one or more contingent attorneys-in-fact who can step in if the person named in the document is unable to fulfill the responsibilities of this position. That might happen if the original agent has died or is incapacitated or otherwise unwilling or unable to act.


To see what can go wrong, consider this hypothetical situation. John Greenbow, age 80, names his spouse Nina, age 75, as his attorney-in-fact, and their two children, Lester and Michelle, as contingent attorneys-in-fact. John creates a separate document naming himself as attorney-in-fact for Nina. Five years later, Nina shows signs of Alzheimer’s disease, so John assumes her financial affairs. But he suffers a stroke soon after and is incapacitated. While Lester and Michelle have been designated as attorneys-in-fact for John, they aren’t authorized to act on behalf of Nina.


This problem could have been easily avoided if John had incorporated language into Nina’s power of attorney that would have enabled the children to act on her behalf as well. And that’s the point—it’s crucial to think ahead and plan for the worst imaginable scenario. If you’ve anticipated all possible scenarios, you can rest easy knowing help will be there when it’s needed.