Is It Too Late For Roth Conversion?

When you're creating a retirement paycheck from a blend of Social Security, pensions, and personal retirement accounts, it only makes sense to do what you can to minimize income and investment taxes. For example, consider the distributions from your traditional IRAs or 401(k)s. Most or all of that income will be taxed at full income rates that now go as high as 39.6%. In contrast, under most circumstances, withdrawals from Roth IRAs aren't taxed at all. So should you switch from traditional IRAs to a Roth? Or is it too late to benefit from such a conversion? 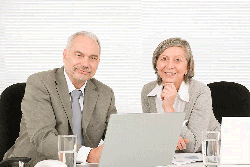 The answer depends on your situation. Because you'll have to pay income tax on the money you convert to a Roth IRA, one crucial calculation involves whether your federal income tax bracket will be higher or lower during retirement. It usually makes sense to convert before retirement if you expect to be in a higher tax bracket later, while if you anticipate being in a lower bracket in retirement, you probably should wait until then to convert. If you are retired and expect to remain in a relatively low tax bracket, you might decide not to convert at all.

The main attraction of a Roth IRA for retirees is the lure of tax-free payouts while living on a fixed income. Distributions you take after age 59½ from a Roth you've had for at least five years normally will be exempt from federal income tax. And, from an estate planning view, with a Roth you won't be subject to the mandatory lifetime distributions that traditional IRAs require. But because a Roth conversion is taxable, it's like taking money out of an IRA for almost any other reason—and it may or may not pay off.

Example 1: You're in the 39.6% tax bracket now, you expect to be in the 28% bracket in retirement, and you have $500,000 in an IRA. If you convert to a Roth this year, you'll have to pay a tax of $198,000. That's probably not worth the future benefit of receiving tax-free payouts—money that would have been taxed at the 28% rate without the conversion. However, if you wait until you drop into the 28% bracket the conversion will cost less and may be worthwhile.

You'll also need to weigh other factors, including the size of your account and whether a series of smaller conversions might reduce your overall tax liability. Also, a Roth conversion effectively could increase the 3.8% surtax on your net investment income. We can help you figure out the best strategy for your situation.